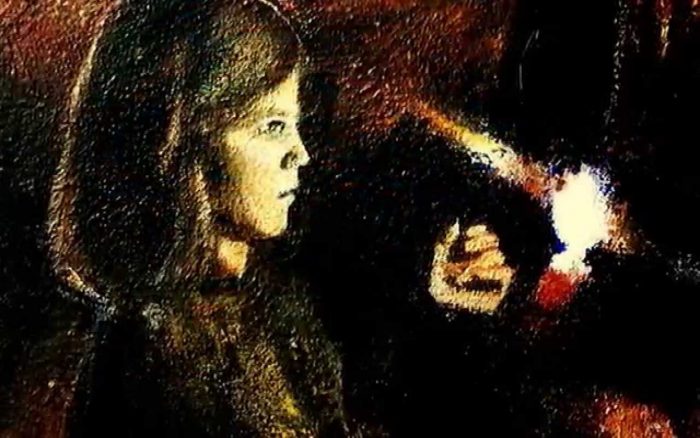 “Monologos” is a violin concerto that has been composed by Ilias Nikolaidis in 2007. It found a high qualityinterpretation in Athens Megaron Concert Hall in 2008, thanks to Hellenic Ensemble of Contemporary Music, violin soloist Costas Anastassopoulos and conductor Theodore Antoniou.”Monologos”was awarded at the composition competition on January 25, 2008 of Athens Megaron Concert Hall.
The music inspired Swiss-Canadian painter Patrick Immer-Landeric. At first it suggested him a kind of powerfull sun-surface exploration, a metaphysical as well than scientific attempt to catch “Gods-fire”… then something more human-like started to reach its appreciation of the far-reaching and so sharp musical piece.
The seriousness and burning dynamic of Nikolaidis creation could harmoniously be linked with the deeply psychological figure of Titan Prometheus (Greek mythology), the famous Olympian-fire stealer. An outcast, a rebell, but also a human civilisation provider. It happened that a part of Immer-Landeric painting work could match this subject. So from a close collaboration with Ilias Nikolaidis himself is born in November 2014 “Monologos of Prometheus”.
Who was Prometheus? Where to find “him” today? Prometheus (from ancient Greek “Prometheas”, “the one that gaze in front of him”) was the brother or an other Titan, “Epimetheas”,”the one that looks behind”, embodiment of a contemplativ but also “non-creativ” kind of mind, that supports a more conservativ way of life.
We must admit we have to pay tribut to the Greek spirit for having cast so clear and strong archetypes,
So “Prometheus” exists not only into old books. It is the impuls to go beyond your own masters, to do better than your own fathers. An attitude that is exposed to arrogance and anxiety,for sure. Consciousness is a wound of the soul… Prometheus is eaten by Zeus eagle… A French philosopher, Gaston Bachelard, saw in Promethian myth the “Oeudipian complex of intellectual life”.
….”But now and here, in my daily life, inside and outside myself…who are you, Prometheus? Are you the revolutionar? The agnostic? the utopist? The explorer? The amazing inventor? The far-sighted organiser? The artistic genius?…
I see you in Giordano Bruno, who paid with his life the right to think that maybe… maybe… the universe is infinite. But I found you also in Tenzin Gyasto, the still living Dalaï-Lama and Nobel Price of peace, when he has the courage to write a book based not on dogmas, but on questions… I see you also, I must say, in the way one of my daughters is looking at her little sister, sometimes, the way you would look at a sacred fire…
Somehow, Prometheus gave birth to modern time. And strangely enough, it is becoming always more difficult to honour “promethean” attitude. Scientific rationalism freed western mind from religious superstitions. But no doubt that positivism became quickly a new religion, with its own superstitions. Today we are supposed to have (nearly) all the answers….
All the answers….Really?
Prometheus says that only questionning keeps our mind alert,
And is there another way to also keep alive the little flamme of our humanity?”
Patrick Immer-Landeric